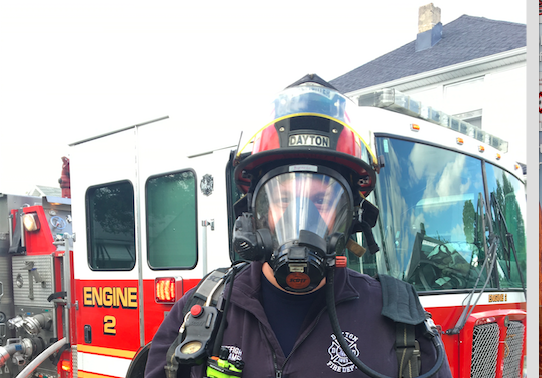 Last evening we had a first in garage fire with another garage as an exposure.  I was driving the truck and took the front of the house.  Upon arrival one garage was almost completely gone and the exposure garage was now well involved.  I prepared the truck for a defensive attack.

As I was setting up the aerial ladder the smoke drifted towards the street.  It went very quickly from sunshine to almost pitch black.

I was able to stop what I was doing and grab the Driver’s SCBA pack.  Within a minute I was on air and went back to work setting the aerial up.  Wearing my pack did not impede any of the tasks that I needed to perform as the driver/operator.

Did I look like an idiot…..probably a little more than usual.  Did I get shit from the guys….yeah a little bit!  Do I give a shit what they think…NOT ONE BIT!  I know that I did the right thing for myself, and my family.  Think about all of the chemicals you have in your garage, nothing good can come out of inhaling them.  It doesn’t matter if you’re in the fire or 50 yards away in the middle of the street.  If you’re in a non-firefighting mode at a scene and smoke starts drifting away, throw a pack on.  The Fire Service needs to understand that just because we aren’t actively firefighting, we still can get exposed to the harmful chemicals and carcinogens in fire smoke.  We must take the necessary precautions to reduce our exposure…..in this case it’s as simple as throwing a pack on.